Vettori hungry to show his skills after year-long suspension

“I’ll come out clear minded as I can, solid, but I know that this past year will show. The fighter that I’ve been putting aside for all this time”

After a year-long suspension due to traces of steroids in his supplements, the “Italian Dream,” Marvin Vettori, returns to the Octagon Sunday. The 25 year old last fought Israel Adesanya in April 2018, becoming the only fighter to ever score a judge’s favor against “The Last Stylebender.”

“I brought the interim champ to a split decision. It was very close, but I still think I got the fight,” he said.

Vettori leans closer into the camera, his voice at a near growl as if initiating a challenge. Should Adesanya fight him as he is now, “The Last Stylebender” wouldn’t make it past the second round. He cites his improved wrestling, striking, and jiu-jitsu as evidence of an Italian Stallion in the making. But Vettori didn’t just refine his physical strength, he used his suspension as an opportunity to transform his mindset.

“The ultimate strength at the end of the day is adapting. I learned to accept something that isn’t fair, and to deal with anger every day at paying the consequence for something I haven’t done. It’s a constant battle, but this made me.” 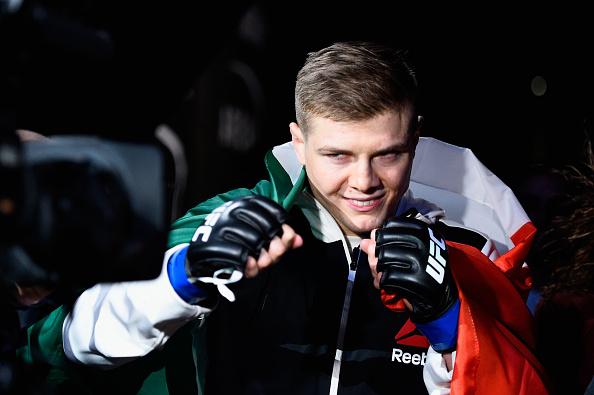 Marvin Vettori of Italy prepares to fight Alberto Uda of Brazil in their middleweight bout during the UFC 202 event at T-Mobile Arena on August 20, 2016 in Las Vegas, Nevada. (Photo by Jeff Bottari/Zuffa LLC)

Though Vettori is itching for a rematch against Adesanya, he must first defeat Cezar Ferreira on Sunday. The Brazilian boasts a strong grappling record, holding a third-degree black belt in Jiu-Jitsu, but Vettori shrugs it off.

“I was made to do this, this was my dream from day one. Ferreira will bring out the best in me. I can finish him and I can break him too.”