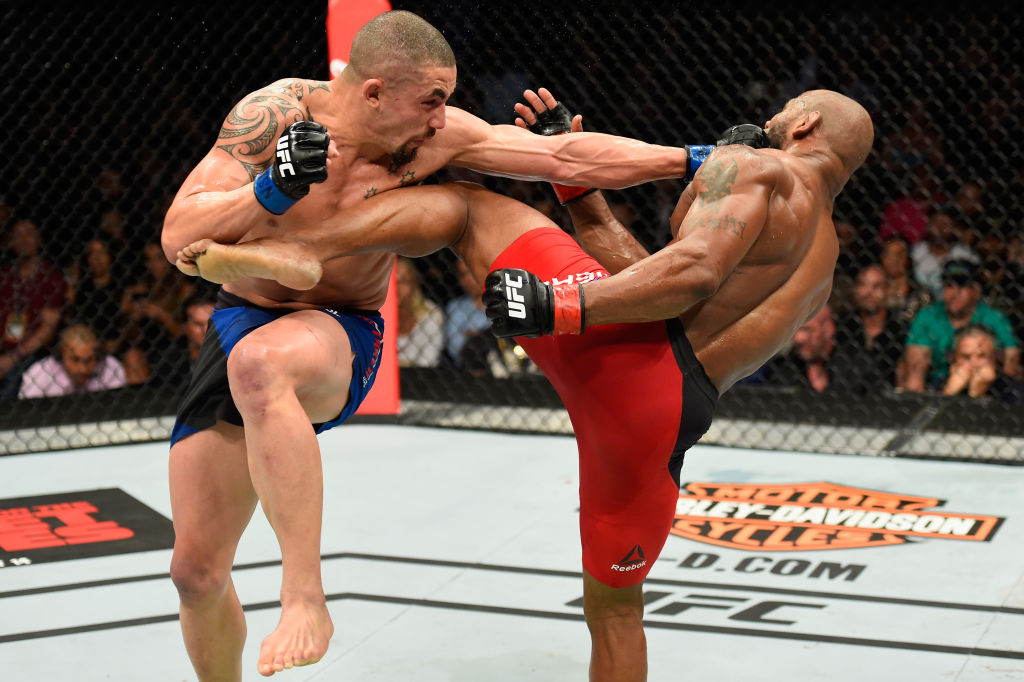 A first-round knee injury wasn’t enough to keep Australia’s Robert Whittaker from taking the interim middleweight title in the main event of UFC 213, as he gutted out a five-round unanimous decision over Yoel Romero at T-Mobile Arena in Las Vegas.

“Champions are made of this stuff,” the New Zealand-born Australian said moments after becoming the UFC’s first champion from “Down Under.”

Now he’ll have a meeting with fellow 185-pound titlist Michael Bisping, who is currently on the sidelines due to injury, setting up Saturday’s bout between the No. 3-ranked Whittaker and the No. 1-ranked Romero, who had yet to lose in eight previous UFC bouts.

“It was a very, very close fight,” Romero said. “If the judges said he got it, he got it.”

Both fighters appeared to be relaxed as the bout opened, each looking for the opportunity to strike. Whittaker was the more aggressive of the two, but the first significant scoring was a takedown by Romero with three minutes left. Whittaker bounced back up immediately and turned away a flying knee and a second takedown attempt by the Cuban. As the round ended, it appeared that Whittaker had hurt his left leg, and he confirmed it to his corner between rounds.

Romero got a takedown early in round two, and while he was able to stay busy with strikes, Whittaker was eventually able to get upright. Romero stayed locked on, though, and he kept the Aussie pinned to the cage until referee John McCarthy restarted the action with a minute left. Romero got right back into the clinch and he scored a takedown right before the end of the frame. 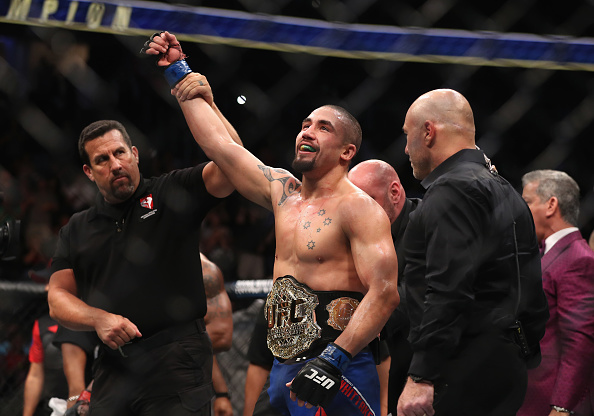 Whittaker landed some hard front kicks in round three, and he had Romero on the defensive and inactive for much of the stanza. At this point, Romero was clearly tired, and as the bout entered the championship rounds, momentum was on the side of “The Reaper.”

Kicks continued to be the weapon of choice for Whittaker in round four, prompting Romero to seek a takedown. Whittaker defended well, even if he eventually wound up getting pinned to the fence. With three and a half minutes left, Whittaker got loose, but he was now limping more visibly. Romero fired off one of his patented flying knees but only landed on the chest, and moments later, Whittaker went on the offensive with a varied array of punches and kicks, and he pushed the pace even more in the final minute. Romero kept looking for the takedown, but his attempts were getting sloppier, and it was another round for Whittaker.

Romero finally got more offensive-minded in the fifth and final round, but his attacks were wild and Whittaker responded with more concise punches that tagged and bloodied the Cuban. After that burst of action, both fighters were feeling the effects of fatigue, but that didn’t stop either of them from attempting to make an impression on the judges down the stretch. With 90 seconds left, the bout went to the mat, with Whittaker on top, and the Aussie used that advantage to unleash a series of hard elbows that cemented the round and the fight for him.