Ray Borg's UFC career has been a rollercoaster, but he believes he's finally found the formula to fix what's been holding him back.
Por E. Spencer Kyte, on Twitter @SpencerKyte • Mayo. 10, 2020

“I’ve definitely had some of the highest highs and the lowest lows,” said Ray Borg, who returns to action on Wednesday in a bantamweight clash with fellow upstart Ricky Simon.

The 26-year-old arrived in the Octagon four months shy of his 21st birthday in 2014, dropping a split decision to Dustin Ortiz on short notice just two weeks after defeating Nick Urso in a battle of unbeaten fighters representing Albuquerque, New Mexico under the LFA banner. A few years later, he scored a unanimous decision win over perennial contender Jussier Formiga in Fortaleza, Brazil, earning himself a date with Demetrious Johnson and a shot at the flyweight title.

That win over Formiga came on March 11, 2017. After his loss to “Mighty Mouse” seven months later, there were a couple cancelled bouts as he took time away to care for his son Anthony, who was born with hydrocephalus, and a 2019 loss to Casey Kenney. Borg wouldn’t win another fight until his victory over Gabriel Silva last summer in San Antonio, Texas, one he followed with a decision win over Rogerio Bontorin in February of this year.

Combined together, it’s a unique assemblage of ups and downs, but unfortunately for Borg, it’s the various downs that seem to garner the most attention and serve as the basis for how most observers of the sport view him, even as he goes in search of his third straight victory on Wednesday night in Jacksonville.

“I made it to the UFC at 20 years old and I’m just truly learning on the job,” said Borg, who carries a 13-4 record into his meeting with Simon. “It’s unfortunate that the job I’m learning on is on the biggest stage in the world. 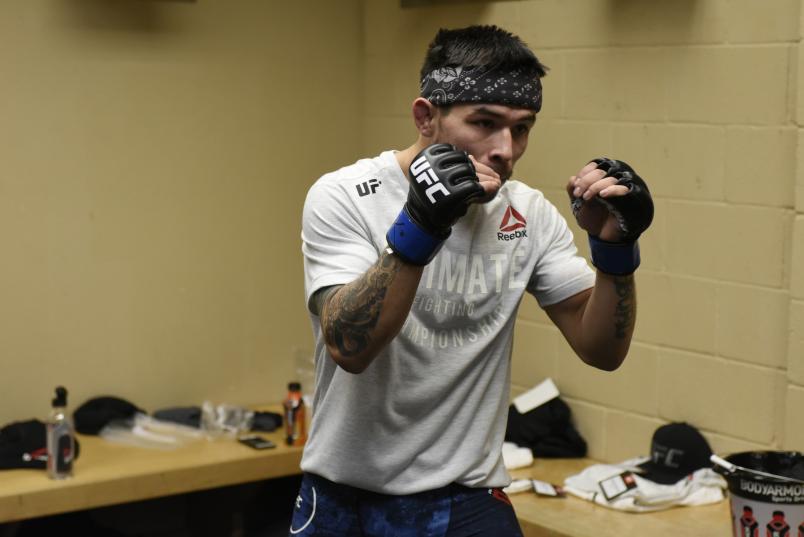 “I didn’t grow up in a home where someone told me, ‘Hey, you’re going to be one of the best athletes in the world one day, so let’s learn how to eat and properly do this and this.’ I was born in a home where everybody will tell you, ‘Good job working 40 hours straight and if you spend the money that you have, there is always the next paycheck.’

Things like that often slip our minds when we think about professional athletes, even though they are true for everyone, because we don’t tend to see those competitors beyond who they are professionally.

While that has changed at little in the age of social media and smartphones, the reality is that we tend to only identify athletes by their profession and equate competing at the highest level in their respective sport with having everything else figured out in life, even though there have been myriad examples to the contrary.

And Borg has had to deal with far more outside of the cage than most 26-year-olds during the course of his UFC career. 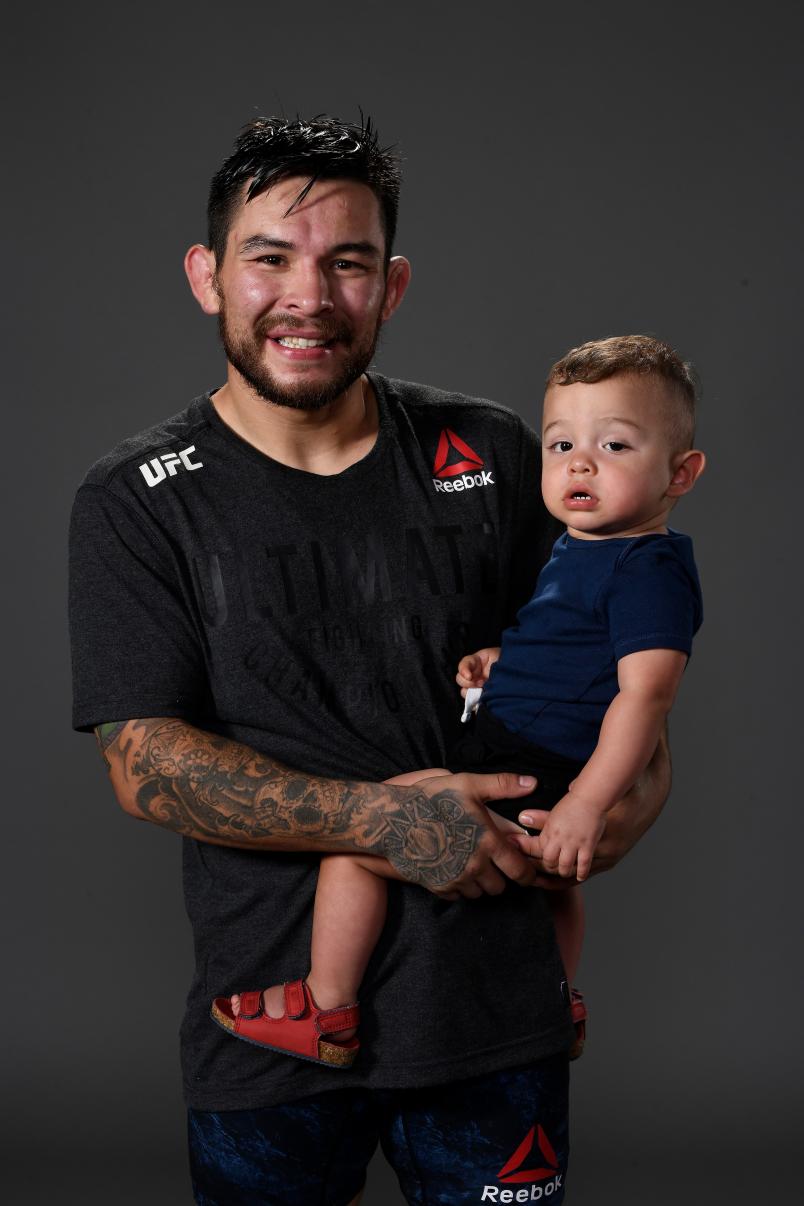 Ray Borg poses with his son Anthony for a post fight portrait backstage during the UFC Fight Night event at AT&T Center on July 20, 2019 in San Antonio, Texas. (Photo by Mike Roach/Zuffa LLC via Getty Images)

“All the weight that I have on my shoulders, the weight of all the things I’ve had to go through are things that normal 23, 24-year-old guys don’t go through,” he said. “I’ve had to take custody of my niece at times and raise her along with raising my first child, who has a condition. It’s not easy.

And while there have been setbacks and stumbles, he’s still a fighter who is just now reaching his athletic prime and has already beaten a highly regarded veteran like Formiga and fought for UFC gold.

So while it’s understandable why some observers fixate on his struggles and would prefer to take a “prove it to me first” approach when it comes to forecasting Borg’s future inside the Octagon, the Albuquerque native looks to a pair of elite UFC talents who dealt with similar professional struggles early in their respective careers as examples of what he can still achieve as he continues to learn how to fix his previous mistakes and avoid them in the future.

“Kelvin Gastelum had weight issues that forced him to keep moving up and down,” Borg said of the former Ultimate Fighter winner who frequently struggled with his weight during his time at welterweight before relocating to middleweight and establishing himself as a fixture in the title chase. “People don’t remember, but (Henry) Cejudo was the same way; he missed weight in LFA before reaching the UFC and he’s had issues since then too.

“Cejudo got wrecked the first time he fought DJ and he was already 29 when that happened; I was 24. Could you imagine if I got another shot at him, later in my prime, when I knew what I was doing and was a more skilled fighter, a more polished professional? Could you imagine how that would go? 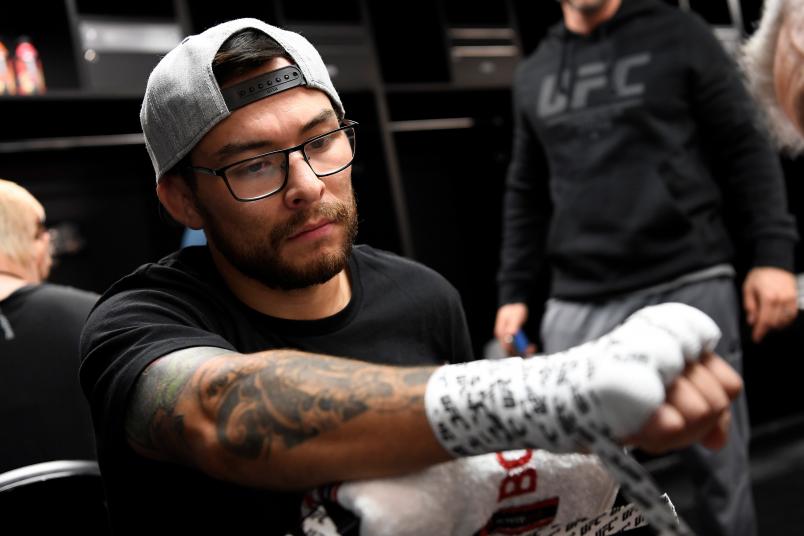 “That’s definitely something that has really been playing in my head is that I’m just now starting to hit my prime, but all the bad often overshadows the good.”

That’s something Borg hoping to change, beginning with this bout against Simon on Wednesday night.

“I want to go in there and I want people to not know me as a guy who can make weight every so often and win every so often,” began Borg. “The thing people tend to forget or that gets overshadowed by the weight cut issues and things like that is that I can fight and I’m pretty damn good at it.

“I really think with this fight and with his style, this is going to be a cool opportunity to show people my full skill set,” he continued. “The truth is that people have no idea about all of my talents. They’ve seen me wrestle people, grapple people, and manhandle people, but no one has seen my full skill set and with this style of fight, I think it’s really going to show.” 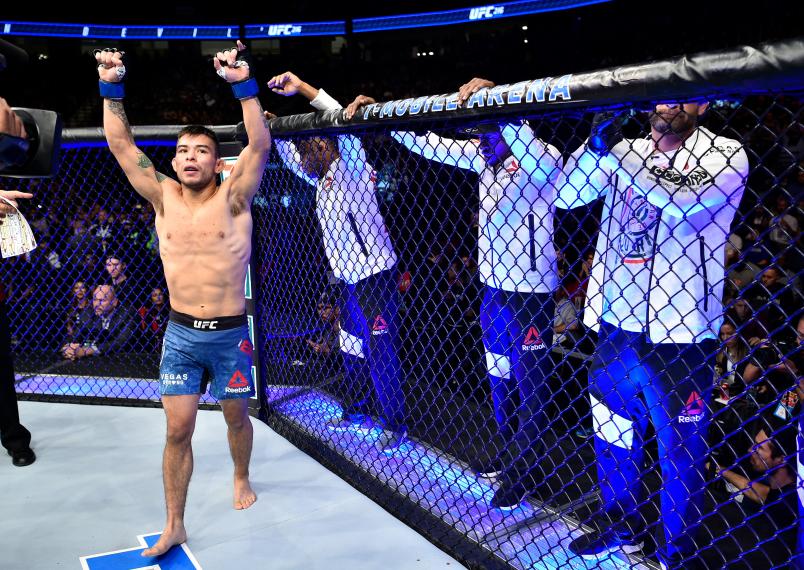 Ray Borg stands in the Octagon prior to his UFC flyweight championship bout against Demetrious Johnson during the UFC 216 event inside T-Mobile Arena on October 7, 2017 in Las Vegas, Nevada. (Photo by Jeff Bottari/Zuffa LLC via Getty Images)

Ray Borg has had incredible successes and demoralizing failures, and he’s done it all while trying to figure out life on both the personal and professional fronts, dealing with serious challenges on each path along the way.

He’ll be the first to tell you that he doesn’t have it all figured out quite yet, but honestly, who does?

What matters most is that rather than make excuses or give up, Borg simply continues to roll with the punches, taking responsibility for his missteps and trying to do better the next time out, all the while thinking about Gastelum and Cejudo and the similar professional challenges they faced before righting the ship and establishing themselves as elite talents.

“I look up to them because they fixed it, so why can’t I?”