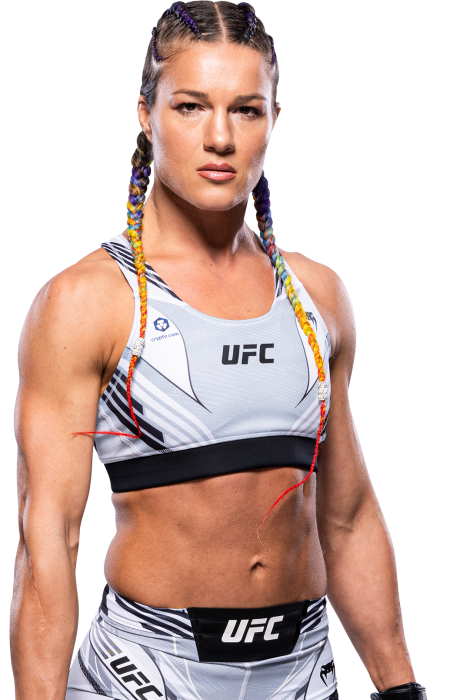 TUF 20
On episode nine (quarterfinals), Herrig was submitted by Randa Markos via armbar at 2:14 of the first round
On episode five, Herrig won a two round unanimous decision over Heather Clark

Q&A
When and why did you start training for fighting? I started kickboxing in 2003 out of high school because it was a sport I could still compete in after high school.
What ranks and titles have you held? I had various IKF, and WAKO kickboxing and Muay Thai titles. Purple belt in BJJ
What does it mean for you to fight in the UFC? Fighting for the UFC is the biggest accomplishment any fighter could ever accomplish. It's a complete honor, especially being in the first set of female strawweights to compete in the UFC.
Did you go to college and if so what degree did you earn? I did not go to college. After high school I went to beauty school and became an Esthetician.
What was your job before you started fighting? Esthetician
Specific accomplishments in amateur competition? I didn't have the luxury of fighting amateur in MMA since I was already a professional Muay Thai fighter. I was a two-time North American IKF kickboxing champion and a two-time WAKO kickboxing champion.
Specific accomplishments in pro competition? I was on the reality TV show "Fight Girls" on the Oxygen channel (a female Muay Thai competition show). I also fought for the St. Louis Enforcers in Chuck Norris's World Combat League. In 2009 I won the IKF Bantamweight Muay Thai US title (Bantamweight in Muay Thai is not the same as it is in MMA. I fought at 120 lbs).
Favorite grappling technique: I like any kind of choke – D’arce, Anaconda
Favorite Striking technique: Push kick (preferably to the face)